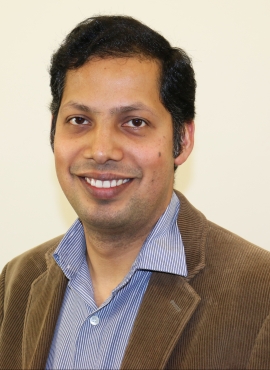 Mohit Singh
Associate Professor of ISyE and Director of ARC

Mohit Singh is an H. Milton Stewart Early Career Professor and Associate Professor in the H. Milton Stewart School of Industrial and Systems Engineering. Prior to this, he served as a researcher in the Theory Group at Microsoft Research in Redmond, Washington. Singh’s research interests include discrete optimization, approximation algorithms, and convex optimization. His research is focused on optimization problems arising in cloud computing, logistics, network design, and machine learning.

Singh received the Tucker Prize in 2009 given by the Mathematical Optimization Society for an outstanding doctoral thesis on “Iterative Methods in Combinatorial Optimization.” He also received the best paper award for his work on the traveling salesman problem at the Annual Symposium on Foundations of Computer Science (FOCS) in 2011. Previously, Singh was an assistant professor at McGill University from 2010-2011 and a postdoctoral researcher at Microsoft Research, New England from 2008-2009. He obtained his Ph.D. in 2008 from the Tepper School of Business at Carnegie Mellon University.